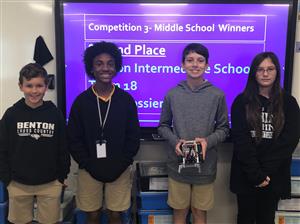 A year of hard work in Cyber Fundamentals has paid off for BIS Middle Team 18. Six graders Jack Kielty, Tre'C Dunson, Rylie Lemieux, and Summer Ray, who make up the team, won second place in Competition 3 of the Regional Autonomous Robotics Circuit (RARC).

Over the course of the school year, students learned how to program LEGO EV3 robots to accomplish several different kinds of tasks. Students learned how program the bots to travel specific distances, make specific turns, show images on the robots LCD screen, and so much more.

"Students really get a feel for the basics of Computer Science in this class," says Cyber Fundamentals teacher, Linda Morgan, "Understanding squences and logic at this level prepares students to tackle other programming languages in the future."

The robots are programmed in the Scratch programming language. Scratch, which is a JavaScript based, is the world’s largest coding community for children and a coding language with a simple visual interface that allows young people to create digital stories, games, and animations.

"I'm really proud of these students," Morgan says, "They worked hard, productively struggled, and now get to celebrate the success that kind of hard work can bring. There's no better feeling."

The team broke themselves down into parts to share the load of accomplishing all of the tasks in the competition in one minute, 30 seconds. Team Leader Jack Kielty kept the team on track, while team programmer Rylie Lemieux created and recreated the team's programs, team robot runner Tre'C Dunson made sure the right programs sent the robot in the right directions, while team builder Summer Ray built all of the little LEGO structures the robot would deliver all over the competition mat. This team effort secured them 158 points in that one minute, 30 seconds, which was good enough for second place against 6th, 7th, and 8th graders from around the region.

Congratulations, Tigers, your hard work has paid off!