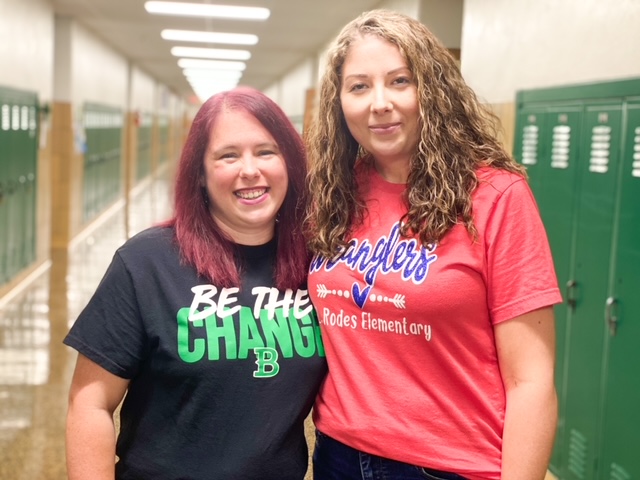 While many of their colleagues are digging their toes in the sand and enjoying a much-deserved break, Terri Finklea and Krystal Parrish who both work for Bossier Schools will be spending their summer recovering from two surgeries that will forever change the course of their lives and create an inseparable bond between them.

Finklea, a clerical aide at T.L. Rodes Elementary in Haughton, is donating her left kidney to Parrish, a freshman English teacher at Bossier High, on June 11. Until just a few months ago, the two women were complete strangers other than Facebook ‘friends’ -- a connection dating back to 2004 that neither can explain to this day. Call it serendipity.

“I know this was the purpose for that friend request seven years ago,” Finklea said. “It was the plan all along.”

This is a story about defying the odds, faith and the most selfless act imaginable, and it began eight years ago when Parrish was pregnant with her daughter.

Her kidneys were leaking microscopic blood, which led to a diagnosis of IgA Nephropathy, a chronic disease that progresses and can lead to end-stage renal failure. All seemed fine until last August, when Parrish was admitted into the hospital after her blood pressure spiked to stroke level. She was in stage four of kidney failure and in need of an organ transplant.

“I had 80-percent damage to both kidneys. They were only functioning at 20-percent,” Parrish recounted. “It was devastating because I have an eight-year-old and I want to be there for her.”

Once home, her family urged Parrish to make a Facebook post, though she was reluctant to do so.

“You can’t just ask for a kidney,” Parrish joked.

She finally agreed to share her story, not expecting anyone to respond, and that is when the odds began turning in her favor. Finklea saw the social media post and was deeply moved.

“I felt like God put it on my heart to see if I was a match,” Finklea explained. “I knew helping her meant I was helping her, her husband, daughter and her students.”

Finklea messaged Parrish, volunteering to be tested to see if she was a match.

“It was surreal … because it gave me hope I might be around longer,” Parrish added.

The next several months were a whirlwind with testing and donor matching. All the while, Parrish endured the arduous task of undergoing seven hours of dialysis each night before going back to teach the next morning.

Finally, a breakthrough in February. Finklea learned she was a match. The odds of that happening on the first go-around and the donor not being a family member are about 1:100,000 according to Parrish. At that point, the two decided to meet for the first time and went to Flying Heart for lunch. They hit it off instantly.

“God put me on this path for a reason and it was a great first meeting,” Finklea remembered.

Still not approved for the transplant, life went on. It was not until May, when the school year was wrapping up and Parrish celebrated her 35th birthday a few days before, that she received a life-changing text from Finklea. The transplant had been approved and a surgery date was scheduled for when the two got out of school. It was now for real.

“It took us seven months to get here, but looking back it flew by,” Finklea said.

Days before the surgery, Finklea was reminded by the transplant team she could back out, but she quickly said no.

“I have been in total peace to do this,” she professed. “I always put myself in her shoes and that made it easy … If I would accept a transplant with no questions asked, why wouldn’t I be willing to donate?”

“I know what a big step it is and a life-changing surgery for me,” Finklea added. “Donors still have life to move forward to. The sacrifice I’m making is small compared to what Krystal has suffered.”

If all goes as planned, Parrish will no longer need dialysis, but will be on anti-rejection drugs the rest of her life. She will also be able to enjoy red sauce on her pizza again, something Parrish has missed since being in renal failure. She and Finklea are looking forward to that future lunch date at Flying Heart, which is sure to be an emotional reunion.

“Words can’t describe how thankful and appreciative I am,” Parrish said. “To say we are friends is an understatement. We are family. There’s not enough words to describe how I feel for the gift of my life.”

Editor’s note: According to U.S. Government Information on Organ Donation and Transplantation, more than 107,000 people were on the national transplant waiting list as of February 2021, the vast majority awaiting kidney transplants. The National Kidney Foundation reports the median wait time for an individual’s first kidney transplant is 3.6 years, yet 13 people die each day while on the waitlist. For information about being a donor, visit organdonor.gov